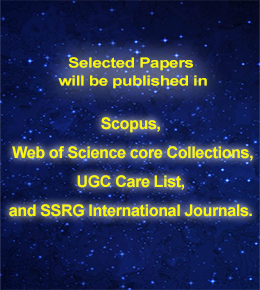 **Note- Accommodation will be arranged based on prior notice.

** Registration fee includes conference kit, refreshment, lunch, etc.
** A paper may contain 5 authors (including guide) in the nominal charge.
** If there is more than 5 authors in the paper, extra author have to pay Rs.500/- per head.
** Any one author can come and present their paper for mentioned registration fees.
** If co authors wants to participate, he / she has to pay Rs.500/- per head.
** Acceptance / Rejection will be intimated as soon as possible.
** Other State / Foreign authors who are not able participate can present their paper in absentia mode.

All selected papers will be published in SSRG International Journals

Nellaiappar Temple
Located far off almost 700 kilometres of the capital city Chennai, the large town of Thirunelvelli in Tamil Nadu, snuggled among a ton of small towns is the perfect destination if you want to soak in some southern feels. Not just in distance, but Chennai and Thirunelvelli are far off in vibes as well. On the embankments of the piuos river Thamirabarani, irunelvelli has been an archaic settlement which has been under the influence and glory of powerful kings ranging from Pandyas to Cholas to Ma’bar to the Madurai Nayaks. No wonder it still retains all its grandeur and divinity even after its expanse as a town with a roaring economy.
Sankaranarayanan Koil (Sankarankovil)
A country of many religions, rich culture and traditions, India has a wide variety of religious destinations for every tourist around the world. The Sankaranarayanan Koil in the city of Tirunelveli, Tamil Nadu is one such popular temple in the religion of Hinduism. The very first look of this temple will clearly explain the reason of its huge popularity in this religion. The significant and colorful statues over the entrance, and the golden hue of the majestic temple is quite enough to mesmerize any traveler.
Papanasam
Papanasam is a small, dainty village present in the Tirunelveli district of the state of Tamil Nadu. Located at about 45 kilometers from the main city of Tirunelveli, this village is a famed local picnic spot for its wide array of sights and tranquil ambience. Surrounded with lush greenery, the mountain area has got a dense flora with the Thamirabarani river flowing through it. The name Papanasam comes from Papneswarar, an incarnation of Lord Shiva present in the Papanasar Svamy temple, which attracts a lot of devotees of the Lord annually. A majestic dam, which has been built across the river, and the waterfalls in the region are great attractions of this locality. With such a plethora of activities to carry out, the village certainly is one of the best places to escape the busy hustle of life and get closer to nature.
Kuttralam
Known as the Spa of Southern India, Kuttralam is located at the Western Ghats. A number of perennial rivers originate from this area and thus provide the town with a vast array of flora and fauna. The various waterfalls that are located in the area attract a huge number of tourists each year and visiting during the months between January till April is considered the best. The Shenbagadevi Amman Temple is a must visit and are located near the Shenbagadevi falls.
Mundanthurai Tiger Reserve
The second largest protected reserve forest in Tamil Nadu, Mundanthurai Tiger Reserve spreads across an area of 895 square kilometers at an elevation of 1,800 meters above sea levels at the Western Ghats. The sanctuary is home to a wide variety of flora and fauna including several species of endemic plants, fish, birds, amphibians, reptiles and mammals. Also the Mundanthurai Tiger Reserve as the name suggests is a major habitat of the Royal Bengal Tiger.
Ulagamman Temple
Located in Tenkasi or South Kasi, the Ulagamman Temple is one of the major temples built by the Pandya Kings. The massive gopuram of the temple is the second largest in Tamil nadu and is build in the distinctive Pandya Dravidian style of architecture. The temple like the various other Dravidian temples has the musical pillars which are intricately carved. The main deity in the temple is Kasi Visvanathar a form of the Hindu deity Shiva.
Venkatachalapathy Temple
Located in the temple village of Krishnapuram, the Venkatachalapathy Temple is one of the major temples in the city. The temple site although is considered to be 9000 years old the current structure dates back to being 700 years old. The temple is adorned with a brightly colored gopuram and is one of the few temples dedicated to Venkatachalapathy a form of the Hindu deity Lord Vishnu. Being an ancient city famous for its various temples, Tirunelveli is one of the must visit places in Tamil nadu. The city is home to various perennial rivers and due to its location at the foothills of the Western Ghats Tirunelveli is also famous for its various waterfalls and is also nicknamed the Spa of South India.